It’s a peek into the magic land. So, get ready to witness the unveiling of inspirations behind the most famous and all-time favorite Walt Disney characters. Inspiring Walt Disney: The Animation of French Decorative Arts. The exhibition opens this December 10, 2021 exploring Disney’s French Inspiration at The Met.

The first of its kind, the collection, is what they say, more than meets the eye. In other words, it’s a revelation. An insight to the world of Disney. How his travels across Europe influenced or rather inspired his design thought. Subsequently, the dreams that he converted to reality in motion pictures and theme parks. His fascination with the exquisite French art in everyday objects, life stories and its rich cultural heritage. Thus, the exhibition is, in a way, understanding the design genius of Walt Disney.

The collection is massive.

Collections from Walt Disney Family Museum, Walt Disney Imagineering Collection, Walt Disney Archives and the Walt Disney Animation Research Library make up a major part of the exhibition. There are 150 production artworks on paper and 60 works including various objects. From furniture and tapestries, to Sèvres porcelain and Boulle clocks, the showcase brings quite a collection. One look and you will know which character or object the inspiration lead to. 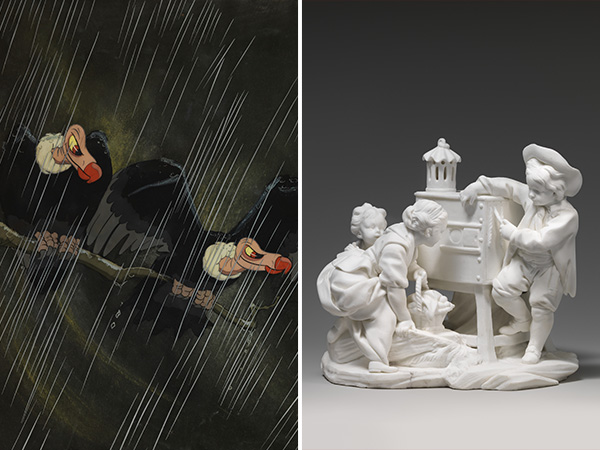 A major aspect of the exhibition is also the footage from films on technological and artistic developments. These cover the process of creating the animations at the studios during Disney’s lifetime and also, later. One will see the medieval influences in Sleeping Beauty (1959) and Gothic Revival architecture in Cinderella (1950). In addition to the most Rococo film, the 1991 Beauty and the Beast that forms a major part of the exhibition. Likewise, objects like the kettle or the clock that were brought to life in this Disney’s favorite amongst the audiences, are all on display.

Above all, it depicts Walt Disney’s personal relationship with France. In addition to personal footages of family trips to Paris and Versailles. And how his repeated visits to Western Europe gave him a profound source of inspiration to create all the history. Not to miss is his collection of miniature furniture and dollhouse objects that led to his magical theme lands.

This section is about French and German Rococo porcelain figurines brought to life by the first generation of Disney animators. These figurines were originally inspired by the pastoral scenes of French Rococo painter Antoine Watteau and his contemporaries. There are story sketches for two of Disney’s ‘Silly Symphonies’ – The Clock Store, 1931 and The China Shop, 1934. 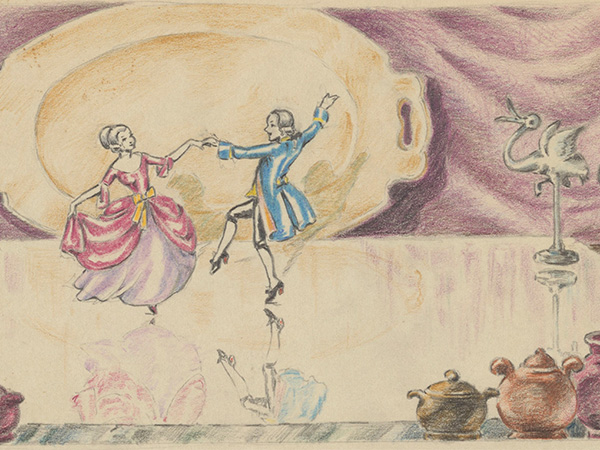 Inspired by the Brothers Grimm fairytale, the subsequent sections focus on the early animated features like the 1937 Snow White and the Seven Dwarfs. There’s also a gouache on celluloid depicting two avid-eyed vultures from the film, which Walt Disney presented to The Met in 1938. Consequently, this gift to the Museum was quite a topic with the press. Especially, with The New York Times Magazine questioning if, “It’s Disney, but is it art?”

Focuses on the barrier-breaking female artists like Bianca Majolie and Mary Blair from the creative realm of the Disney Studios. Apparently, Mary Blair was popular for her bold and highly colorful style, the driving force behind the look of feature films from 1940s to early 1950s. 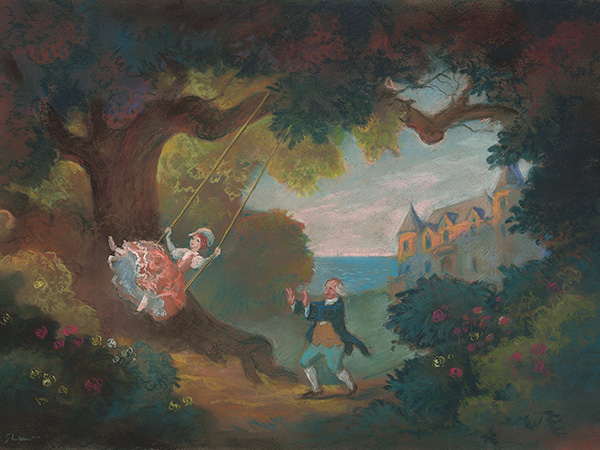 Beauty and the Beast by Mel Shaw Disney

The exhibition will also present the 16th-century portrait of Magdalena González, lent by Ambras Castle in Innsbruck, Austria. Her legend is associated with the story of Beauty and the Beast for generations. Young Magdalena was afflicted with a genetic condition causing exceptional hair growth all over her body. Her and her family’s story is one of alienation and oppression. 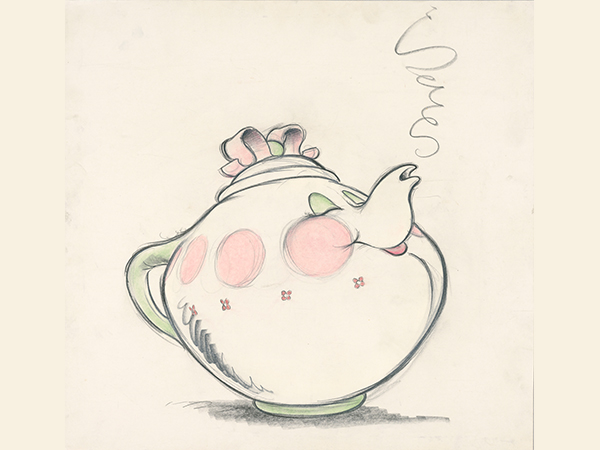 The concluding section displays Disney architecture, especially the fairytale castles, a signature aspect of Disney movies and theme parks. Subsequently, a presentation of Walt Disney Imagineering concept art will explore the historical comparisons of these designs. The centerpiece of this section is the first bird’s eye view of Disneyland by Herbert Ryman. Interestingly, he drew it under Walt Disney’s guidance over one weekend in the fall of 1953.

Also, there’s going to be on display the only two pairs of so called Tower Vases created by Sèvres in 1762-63. These vases will reunite for the first time. Created with the same design sense like Disney castles they inspire their audiences to imagine endlessly.

will bring to listeners behind the scenes on the collaborations among Disney’s animators and artists. One can also hear commentary and personal reflections in the melodious voice of Belle by Paige O’Hara and Mrs Potts by Angela Lansbury. In addition, the voices of producer Don Hahn and animators Glen Keane and Jean Gillmore is also there. The Audio guide of the exhibition is accessible through rental devices in the museum. It is also available free online on The Met website and on Spotify.

Let us know if you enjoyed reading Disney’s French Inspiration at The Met. Leave us a comment or suggestion.