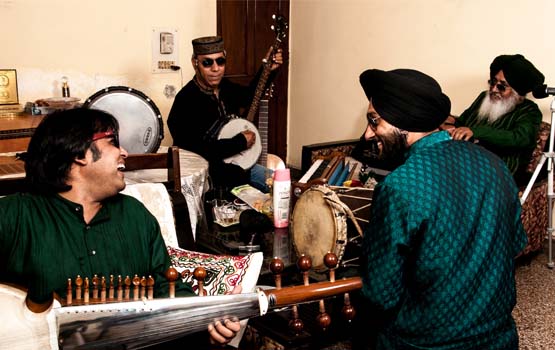 Chaar Yaar during a jam session

Sakhiya by Chaar Yaar is a musical extravaganza by a dynamic group of diversely talented artists like Madan Gopal Singh, Deepak Castelino, Pritam Ghosal and Gurmeet Singh along with Joel Bluestein and Timothy Hill on Thursday, 7th January 2016 at 6:30 pm at C.D. Deshmukh Auditorium, IIC New Delhi for their Album release of Sakhiya.

The Group Chaar Yaar is the musical journey of four friends from different backgrounds but in love with music, founded in 2003, to splurge in the world of music and rhythm. As if destined, each had a unique element to rightly spice up this brew of musical concoction to entice every audience they played to. Madan Gopal Singh, the vocalist and a poet; Deepak Castelino, the ace guitarist and banjo player; Pritam Ghosal, the young and soulful Sarod player and Gurmeet Singh, the young and energetic multiple percussionist.

Initially, when the group started they experimented with Sufi texts of Baba Farid and Rumi from 12th Century and traversed through various genres, around the world, enjoying, understanding and associating with various cultural interactions across continents.

Gradually, the four evolved with their musical expeditions, experimenting with songs and poetry spread across various cultures globally and across different timelines. It led to the incorporation of music and poetry as diverse as that of Brecht, Lorca, Tagore, Puran Singh, Hikmet, Hamzatov, Faiz, Nagarjun and more, thanks to their many travels around the world.

This also saw the group musically following original translations by Madan Gopal Singh, the voice of the group, a poet by choice. An indigenous Baramaah in Punjabi, for example, was sung with Simon and Garfunkel’s canticle “Scarborough Fair’ or John Lennon’s ‘Imagine’ as ‘Socho Zara’ or Beatles ‘Because’ with Iqbal’s ‘Ye Gumbad-e-Minai’. The group splurged immensely in the ocean of music.

Finally, this January 2016, the group brings their first album Sakhiya by Chaar Yaar in association with Joel Bluestein and Timothy Hill. 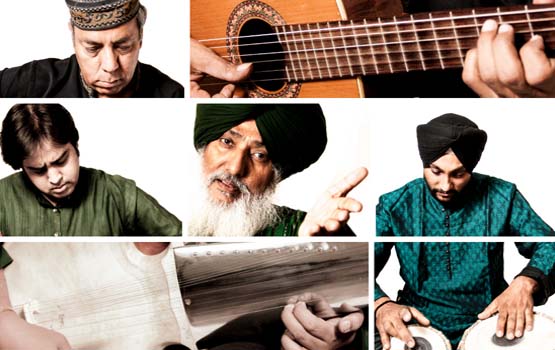 “The album is the result of a musical interaction at Woodstock in Joel’s studio in Woodstock last year where the idea got seeded when we recorded four compositions at one go, without any edits and that’s why the compositions have an air of spontaneity about them,” reveals Madan Gopal Singh.

Chaar Yaar had met Joel and Timothy in 2010 in New Delhi for the first time and then performed together in Sydney in 2011 and in Bordeaux in Italy. It was last year in US when they recorded this album, a collection of travelling songs, essentially Sufi numbers inspired by Bulley Shah, Kabir, Shah Husain and John Lennon.

“It’s a pleasure to work with our American fellow musicians, Joel Bluestein and Timothy Hill, who bring multiple layers of influences and soundscapes, to our common language – music,” says Deepak Castelino. 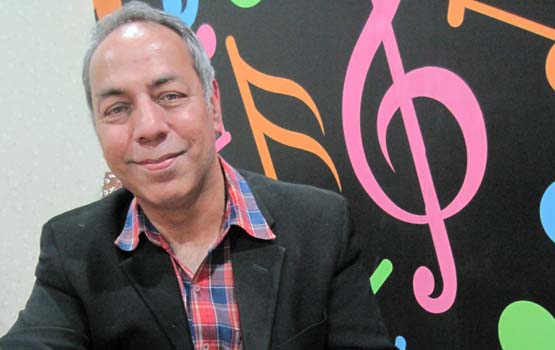 “Coming back to India performing with our dear friends, Chaar Yaar, is a testament to how inspirational the diversity of cultures can be when joyously shared through music – truly a universal language!” exuberates Joel. Having lived in India for a year when he was 24, he happily returns to join his musical friends in sharing this heartfelt musical collaboration.

“Joining with Chaar Yaar is a joyful experience, both a deep immersion into India’s musical and poetic traditions, and a step into the unknown,” says an elated Timothy Hill.

The group shall be playing at five different venues in January including India International Centre on 7th Jan, American Centre on 8th Jan, Miranda House on 11th and India Habitat Centre on 13th.

Madan Gopal Singh teaches literature in an evening college affiliated to the University of Delhi. He has written and lectured extensively on cinema, art and cultural history. Somewhere along his association with friends from the fields of cinema, theatre, writing and fine arts, he found himself graduating from a reluctant amateur singer to a professional one. He has continued to remain seriously engaged with cinema – writing scripts (Rasayatra, Name of a River), dialogues (Name of a River, Qissa) and lyrics (Idiot, Name of a River, Qissa) and occasionally singing (Khayalgatha, Kasba, Idiot, Paradise on the River of Hell) and composing music (Paradise on the River of Hell, Khamosh Pani) for largely art-house cinema. He is also a prolific translator of poetry besides being a poet himself. 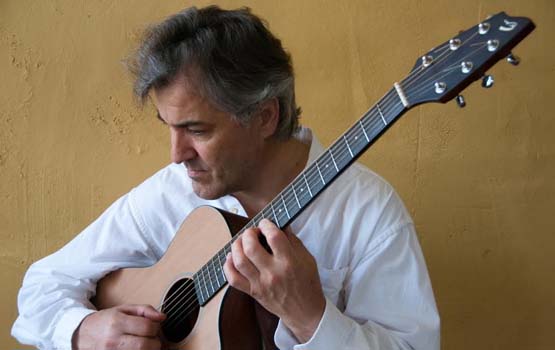 Deepak Castelino (Guitar, banjo) is an accomplished guitarist and banjo player who has been performing on stage for over thirty years. Essentially trained in the western tradition, Deepak has composed and recorded original music for English and Hindi films (Electric Moon, In Which Annie Gives It Those Ones, Khamosh Paani, Milk and Opium, and I Am Kalaam), theatre and television commercials. Deepak has participated in international music residencies and performed on stage for over 20 years with renowned Sufi music exponent and academician Dr. Madan Gopal Singh in Pakistan (2001 and 2006), Switzerland (2004), Italy (2005), Germany (2006), Belgium (2006), Nepal (2010 and 2013), United Kingdom (2011), Australia (2011) and Turkey (2014).

Pritam Ghosal (Sarod), one of India’s finest classical sarod players who has regaled his audiences extensively in India and abroad. A student of Ustad Amjad Ali Khan, Pritam’s mastery of the instrument and high level of maturity in his craft has elicited effusive praise. Pritam has performed with Dr. Madan Gopal Singh extensively and is actively involved with several other performing artists’ ensembles too. 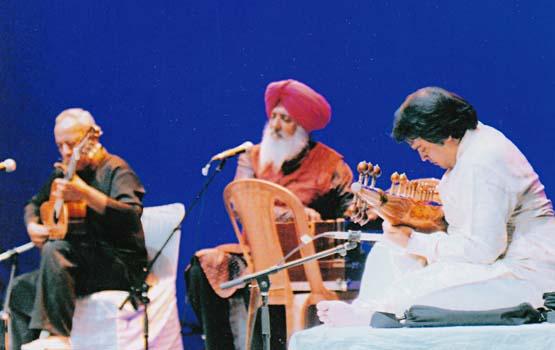 Gurmeet Singh (Percussion), a mature and professional percussionist who is at ease with all types of rhythm playing. He has accompanied leading popular music artists in a variety of genres and due to his amazing skill, dexterity, and temperament is always a big draw at performances. Gurmeet has performed on stage with renowned Sufi scholar and singer Dr. Madan Gopal Singh in Frankfurt (2006), Brussels (2006), Denmark (2009), Nepal (2010 and 2013), London (2011) and Sydney (2011). Gurmeet is also a percussion trainer too who is in constant demand with a variety of educational institutions.

Joel Bluestein is a guitarist singer and record producer from NYC. He founded and owns the Dreamland Recording Studio in Woodstock NY where he has been involved in the production of over 350 recordings including artists as diverse as YoYo Ma, Herbie Hancock, Pat Methany, Suzanne Vega, Joe Jackson, the B52’s, Naz, Joan Jett, and now Char Yar. He was also one of the owners of the historic Wetlands Club in NYC. As a member of the singing group David Hykes and the Harmonic Choir he met Char Yar while on tour in India in 2011. That meeting and early collaboration led to recording Chaar Yar at The Dreamland Studio in 2015. Having lived in India for a year when he was 24, he happily returns to join his musical friends in sharing this heartfelt musical collaboration.

Timothy Hill, singer, guitarist, pianist, composer, Timothy Hillʼs work spans many genres. He has been hailed by The New York Times as “a virtuoso” of harmonic overtone singing for his work with David Hykes and the Harmonic Choir, beginning with the seminal album Hearing Solar Winds. He contributed to the Grammy-nominated Pete Seeger: The Storm King, the last recording featuring that great American folk legend. He has collaborated with veteran avant-garde composer Pauline Oliveros and clarinetist David Rothenberg on Cicada Dream Band, and he appears on the forthcoming Sakhiya by singer-poet Madan Gopal Singh and the faqiri quartet Chaar Yaar. In addition, Hill has released three albums of his original songs, This Bright World, The Human Place and Spiritʼs Body.
[/show_more]